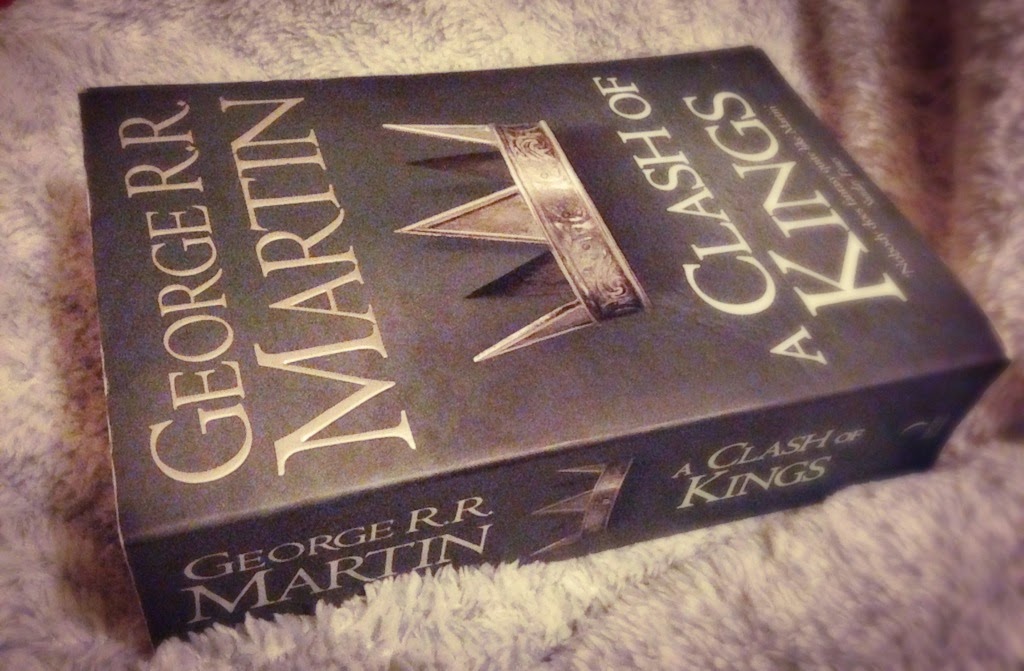 I have just finished the second installment in the A Song of Ice and Fire, and it’s left me wanting to read the next one straight away (though it will have to wait until I’m back from Ibiza!!).

The character development in this book is really incredible. I grew to dislike those I didn’t have much of an opinion of, began to like those I wasn’t too keen on, and fell completely in love with the characters I was already fond of.

Tyrion: I loved Tyrion in the first book, and I love him even more in the second. George R.R. Martin has created such a fine, intelligent, funny, loveable character, and I’m hoping he sticks around for a long long time…

Arya: Okay, Arya is just such a badass in this book. I love her. I can’t wait to see her become even more badass, which I’m sure she will.

Jon: He’s just an all round good guy. I really like Jon, but unfortunately I have yet to like him as much as I do in the TV series. Maybe that’s just because the books don’t show this…

Sansa: Initially I found Sansa irritating in the first book, but in this book we see her become the victim and I really felt for her. I’ve grown to really like her as a character, and Martin does a fabulous job of putting her through some stress. I also love reading her interactions with The Hound in this book.

Bran: I don’t dislike Bran, but so far I have found his chapters in both books less interesting than others. Not much else to say about him, apart from I love his personal carrier Hodor. 🙂

Catelyn: In the first book, I wasn’t too fond of Catelyn. I’m not her greatest fan after the second either but I definitely began to feel sorry for her in this one. She’s a lady who has been through a hell of a lot.

Daenerys: My opinion on Dany has not changed from that of the first book. I find it easier to have a break from the book when I see her chapter is up next, though cannot wait for her to start crossing paths with other characters (if she does!).

Davos:I think Martin was brave to give chapters in Davos’s POV without us having any prior knowledge to who he is, but he did a great job of it, and as a character I like him so far. Definitely hope to see more of him!

Theon: Ahhhh Theon. My favourite addition to the POVs. It’s nice to read from the perspective of someone who is doing wrong and knows they are doing wrong. He really does become quite evil and dark, but always has that conscience making him feel bad. I’m angry at him, but love his chapters!

I’m still really disappointed that Robb is not given a POV as I loved him in the TV series and we really don’t see enough of him in the book. I also feel the same with Shae; she was a lovely addition to the TV series but takes a bit of a back seat in this book.

We get to witness some amazing battle scenes in this book and I can’t wait to see more of them. This book basically leaves us wanting more with every character. Will Sansa ever truly get away from Joffrey and can Ser Dontos really help her? Will Tyrion fully recover? What is Catelyn going to do to Jaime with the sword? What is going to happen to Jon Snow now he is with the wildlings? etc etc, you get the idea! 😉

So all of these good points and you may be wondering why I gave 4 stars and not 5. I just found that the beginning of the book dragged a little. The early chapters filled us in on what is happening and all the connections in Martin’s marvellous world, but I just found them to be a bit slow at first. That being said, I cannot wait for the next book. Bring it on…