Disney’s Frozen is definitely a movie that caused a storm for both children and adults across the nation. It’s a family favourite, and working in a kids play area I have yet to come across a child who doesn’t know every single word to ‘Let It Go’ and ‘Do You Wanna Build a Snowman?’!

Today is Christmas Eve and both my mum and dad were working late, and so to keep me happy, they left some Frozen cupcakes on the kitchen counter for me. Of course, I could not eat frozen cupcakes without sticking the film on as well… 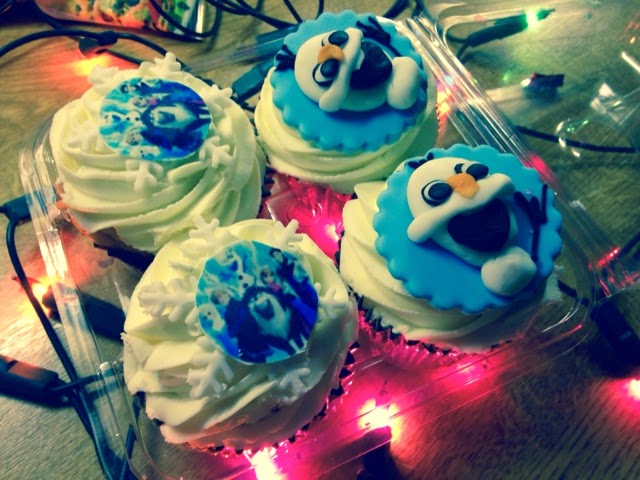 Everyone knows how awesome Frozen is, even those that have yet to watch it. Tonnes of merchandise has followed the film’s success – dolls, clothing, homewear, stationery, and I bet every little girl has asked Santa for Elsa’s famous sparkly dress! But whilst watching Frozen tonight, I decided to make a post about what exactly I think makes Frozen so bloody good.

This is a pretty obvious reason. After watching Frozen a billion times, I still feel the need to sing along to every single song. And the songs just never get boring! I mean, ‘Let It Go’ won an Oscar, and that just speaks for itself really.

2. The acknowledgement of not marrying a man after one day.

Finally a Disney film has acknowledged the fact that you simply cannot marry a man after one day! We don’t want young girls to get their hopes up.

Olaf is a wonderfully pointless yet loveable sidekick we all grow to love. He is so lovely and naive you cannot possibly dislike him. Josh Gad voices him perfectly, and his line of “Some people are worth melting for” brings a tear to my eye every time!

Okay. I admit it. I love Hans. What a brilliant character! He really did have me fooled and I think he’s one of the best Disney villains. He might not be the scariest, or the most threatening, but there’s something very unsettling about finding out that the Prince Charming that stole your heart is in fact pure evil. His moment of reveal is just… BAM!

5. The possibly gay family.
Maybe not a stand out moment for a lot of people, and probably not noticed by a fair few, but at ‘Wandering Oaken’s Trading Post’, the large fella says hello to his family, and we briefly see a male with a few children in the sauna. We can only assume that this is his husband and children, but how great?! And the best part about it? They don’t make a big thing of it. It’s completely normal and accepted! Perfect.

This
film throws aside true loves kiss as the saviour and instead adopts a
much better and more appealing act of love – sacrifice. Seeing Anna
sacrifice herself for Elsa is much more moving than an on-screen kiss.
What can possibly be more loving than putting your life on the line? It
shows us we don’t need men to survive and love isn’t just in the form of
Prince Charming; it’s family!

In reality, I could probably definitely list a fair few more reasons why Frozen is so awesome. The fact that Kristoff asks permission to kiss Anna instead of taking it for granted, the cute relationship between Anna and Elsa when they were children, the amazing animation, Anna’s clumsiness and so much more.
I’m going to assume most of you have seen Frozen by now, but if you haven’t, go and rent yourself a copy, now!