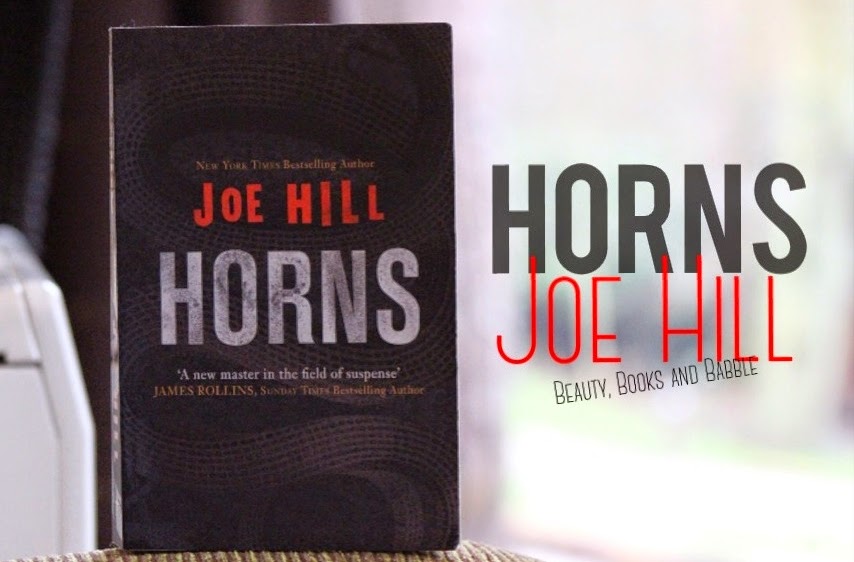 After seeing the trailer for the movie adaptation of Horns, I naturally made the decision to read the book before watching the film, and after hearing nothing but good things about it from my brother, I couldn’t wait to get stuck in.

Horns follows the story of Ignatius Perrish, who is living in his very own hell where his childhood sweetheart and long-term girlfriend, Merrin, has been murdered, and despite the lack of evidence, Ig is the prime suspect, and everyone in his town believes he did it.

When Ig wakes up one morning with an aching head, a stinking hangover, and a fresh pair of horns on his head, he finds he has the scary, yet strangely compelling, ability to make everyone and anyone confide their deepest, darkest thoughts, and with just a touch, Ig can see the multitude of sins people in his town have committed.

“He threw the Bible into the trumpet case as well. There had to be something in there, some useful tips for his situation, a homeopathic remedy that you could apply when you came down with a bad case of the devil.”

There is just one thing Ig wants to do with his newfound power; he wants to find out who actually committed the crime he has been so wrongly accused of…

I am so pleased to say that Joe Hill has followed in the footsteps of his father, the King of horror (see what I did there?!), and has adopted a writing style that keeps you engrossed. He’s also inherited that wonderfully twisted and frighteningly magnificent mind.

In all honestly, I don’t feel my review can do this book justice. Joe Hill’s writing is effortless, and this book grabbed me firmly from the start, held on tightly through every twist and turn within the pages, and still lingers on my skin long after turning the final page. I, like so many readers before me, travelled through every human emotion when reading this book. You will find yourself laughing, boiling with anger, feeling helpless, a few glimmers of hopefulness, and then your heart will be ripped from your chest and squeezed until you sob over the pages of the book.

In my opinion, great characters make a great book, and this book was full of them. I became so darn invested in Ig. He clearly is a just a normal (minus the horns), good guy, and I felt my heart break every time the people in his town tore him down with their vicious and honest words. I found myself falling in love with his wonderful brother Terry, and Merrin was the perfect portrayal of a likeable young woman. Ig is blatantly completely in love with Merrin, and it hurt every time I was reminded that her death meant there was no way for them to reunite.

Lee, our antagonist of the story, is astoundingly creepy, and Joe Hill did an amazing job of writing from his perspective. He genuinely is pure evil, and never failed to make my skin crawl. His dire obsessions with Merrin, fixation with violence and warped mind were far more terrifying than any monster. These traits were made all the more disconcerting by the fact that his true personality was hidden for so long, and he appeared to everyone as a friend.

So, if you fancy a rollercoaster ride through the entire spectrum of emotions, I urge you to pick up this book and read it! Though maybe refrain if you don’t like the occasional bit of cursing and gore (I personally love that s**t!).

“Him and God are supposed to be at war with each other. But if God hates sin and Satan punishes the sinners, aren’t they working the same side of the street? Aren’t the judge and the executioner on the same team?”