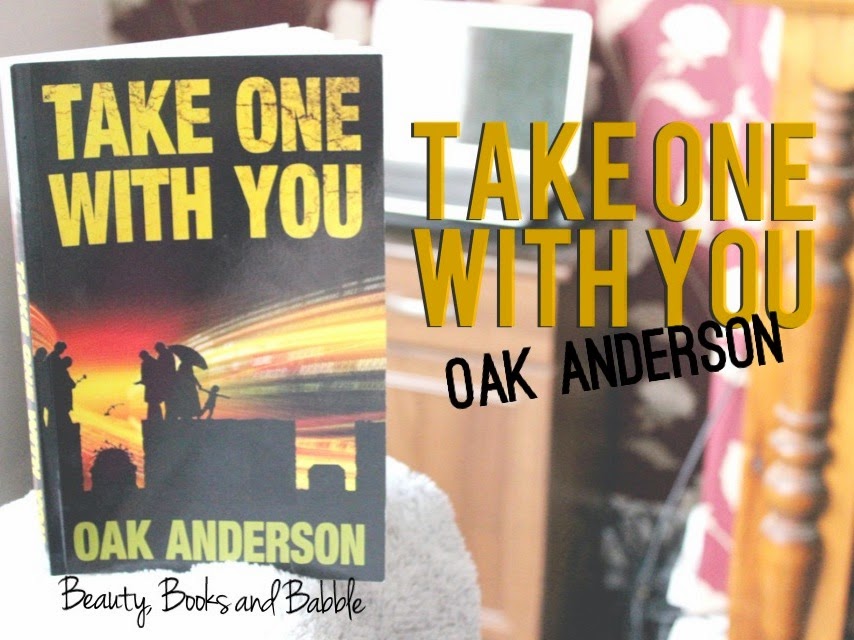 I’d like to start with a huge thank you to Oak Anderson, who was lovely enough to send me a copy of his book in exchange for a review, complete with personal message and signature – perfect!

Charlie and Sarah are two teenagers who are dealing with depression. They meet in an online chatroom and soon come up with an idea to bring meaning to their lives – Take One With You. They encourage other despondent individuals to rid the world of it’s scum, such as paedophiles, rapists and others that have escaped justice. Anyone planning on committing suicide is urged to first kill someone who got away with something terrible – to take one with them.

Without warning, the idea goes viral, and as Charlie and Sarah begin to have feelings for one another, things start to spin out of control around them. Followers of their idea from around the world begin to enact their own versions of the initial plan, and what was originally a scheme to eradicate the scum of society turns into turmoil and anarchy around the globe. The very thing that brought Charlie and Sarah together may actually be the one thing that also tears them apart as they try to deal with the monster they have created…

“If you knew you were going to die tomorrow, would you kill someone tonight?”

Well, to start with, the concept is amazing and it’s executed brilliantly by Oak Anderson. You can’t help but be drawn into the book straight from the first chapter. We see chapters written from different people perspectives and so we get to witness the world through different eyes, how society is slowly crumbling and a global epidemic of murder-suicide threatens civilization. It’s a thought provoking notion: Could you really kill someone if you knew you had no tomorrow yourself? Where does it stop? Who has the right to decide who is worthy of a life and who isn’t?

The story was so engrossing; along with reading the multiple viewpoints which begin to intertwine, Oak Anderson incorporates the use of media, social networking and court transcripts, and so as a reader we observe everything fall into place slowly with each chapter. It’s like finding all of the pieces to a puzzle, and each new piece is building us up to the big finale. A lot of research clearly went into this book, and the writing style kept me hooked too. It was well done, easy to follow, and had some wonderful imagery.

“There were also more sinister theories, theories that Anita dared not think about too long, but nonetheless danced around the dark recesses of her mind like busy moths around a campfire.”

As the book began to draw to a close, I just could not predict the outcome. I was pleased with what I got. The ending was completely unexpected, action packed and brutal. I was in the dark about what would happen right up until it did, and so I was kept on the very edge of my seat in anticipation of the climax.

The only reason I knocked a star off my rating was simply because I personally didn’t connect to the characters despite their in depth and touching backstories. I didn’t find myself worrying for any of their safety through the book. Everything else was perfect!

This is Oak Anderson’s debut book and he has done a brilliant job. It’s a powerfully thrilling and realistic story and was not an easy one to put down. I sailed through it! I would definitely recommend this book who loves a good thriller, and I’m looking forward to seeing more of Oak’s work in the future.

“Evil was many things to many people.”