Have you ever planned something and on the run up to it you think it’s gonna be a flop? You consider every bad scenario possible and what you’ll do if they actually happen? You maybe even consider cancelling it altogether, just to save yourself the humiliation. But then. BUT THEN. It turns out to be pretty much the best thing ever and you want to relive it again and again? Well, that’s what happened when Kirsty and I planned #BloggerHalloweenParty at the end of last month.

We had tonnes of ignored emails, an abundance of stresshead moments, plenty of reservations, daily panicked conversations, a small amount of blood, sweat and tears, and we even had one huge setback of our venue dropping out on us last minute. But then it went ahead to be pretty much the best event in the whole wide world. (Subject to opinion, of course! 😉) Oh, and we were trending on Twitter for the day!

We ended up holding the event at a beautiful venue that came to our rescue: The Rose Villa Tavern. It’s situated in Birmingham’s Jewellery Quarter, and it was an absolutely gorgeous place with a rustic atmosphere. After adding a few finishing touches in the form of Halloween decorations from Festive Lights, we were ready and raring to go. As Sophie and Alex were absolute superstars and finished setting up prizes and displays, and Katie and Hayleigh were super duper doormen for us, we finally started letting guests in to start what was to be an incredibly fun-filled day.

Despite there being no dress code for the day, we did encourage bloggers to dress up if they wanted to. And boy, did people go for it! We had some amazing outfits from Alex’s zombie bride to Natalie‘s Wednesday Adams, and not forgetting our very own minion from Jessica. To accompany all of the amazing outfits, we had some seriously impressive make-up skills floating around the room – Saw’s Jigsaw from Nikki, glitter galore from both Chantel and Nishi, plus a seriously blood-covered Gweni.

I opted for a slightly cleavage-revealing (#sorrynotsorry) dress from Boohoo teamed with a simple pair of black tights and pumps. Oh, and some blood and bruising of course, to really finish the look off! I was really happy with my final look, though sadly I had a red-pink stained chest for a couple of days afterwards…

Having planned a few events previously, Kirsty had received feedback from people that some bloggers seemed to stick to their individual groups and struggled to mingle with one another, which is something that can’t always be helped. So, I got my thinking cap on and decided to plan some nostalgic style activities that bloggers could get up to and help them interact with one another. And they went down an absolute treat, if I do say so myself. 😉

We had mini competitions and games dotted around the room that not only gave the bloggers the opportunity to mix and mingle, but prizes were up for grabs too! There was a good ol’ scavenger hunt for the chance to win colouring books from Abrams and Chronicle, and Lumity Life gave away three boxes of their food supplements (worth a whopping £85 each!!!) to the bloggers who took the most creative photo of their stand. Sunkissed gave away two tanning sets to the two bloggers who posted the scariest selfie on the #bloggerhalloweenparty hashtag, and some fun semi-permanent hair dyes from Colour Freedom were up for grabs to four lucky bloggers who took a photo of their favourite colour.

Sat on the bar was a huge jar of sweeties for people to inspect and take a guess at just how many sweeties were in there. Natalie guessed the closest number (in fact, she was just one off; perhaps we miscounted and she was actually dead on… wouldn’t that be spooky?!) and so got to take the jar home with her. The most popular game by a long shot, however, was the design a pumpkin competition. We provided the basics in the form of a simple pumpkin outline and some felt pens, and then we let everyone loose to design some funky lookin’ pumpkins, and our favourite six won stationery goodies from Mia Felce.

Between all of the mingling, fun and games, bloggers had the opportunity to chat with a few brands who had come and set up on the day. Goodyfull came by with some of their products as well as some incredibly yummy treats for us to try (the brownies were seriously like a dream in my mouth), whilst Dr Botanicals brought a variety of their range to give each and every blogger a product suited to their needs. Finally, we had The Perfume Studio set up stall for the day. They gave all of the bloggers a chance to make their very own perfume which they could then name and take home. The best bit? They keep all of the info so that you can reorder your perfume at any time – awesome right? Sadly, I was too busy flapping about and trying to keep on top of everything to have a go at making my own (boo hoo😢), but everyone assured me it was so much fun.

Meanwhile, I floated around selling raffle tickets to raise money for Mind (we raised an amazing £222!) and give some lucky bloggers the chance to win an assortment of raffle prizes from brands and businesses such as West Midlands Safari Park, Lumity Life, Paul Mitchell, UBU Beauty, Wordery, Abrams and Chronicle, Mr Lee’s Noodles, Marco Polo, Little Bit Lavish and so many more. It was a cracking set of prizes and I was lucky enough to walk away with four myself. 😍 We were all kept watered and fed through the day thanks to the bar staff at the venue, The Berry Company, Juicy Fuel Cola, and the wonderful Jamie who handmade some treats for every to munch on. She even catered for allergies, so she is literally a massive superstar.

In fact, every single blogger at #bloggerhalloweenparty was a superstar. Quite honestly, it was the nicest bunch of bloggers we could have asked for, and they were all so damn lovely. (Honestly guys, you were!) They made me feel so at ease, and really gave me a boost as they constantly reassured me that it was a great event. Three hours well and truly flew by, and before the time came to say goodbye to everyone, we made sure to hand out a few final prizes for Best Dressed, Best Make-up and Best Use of Social Media. 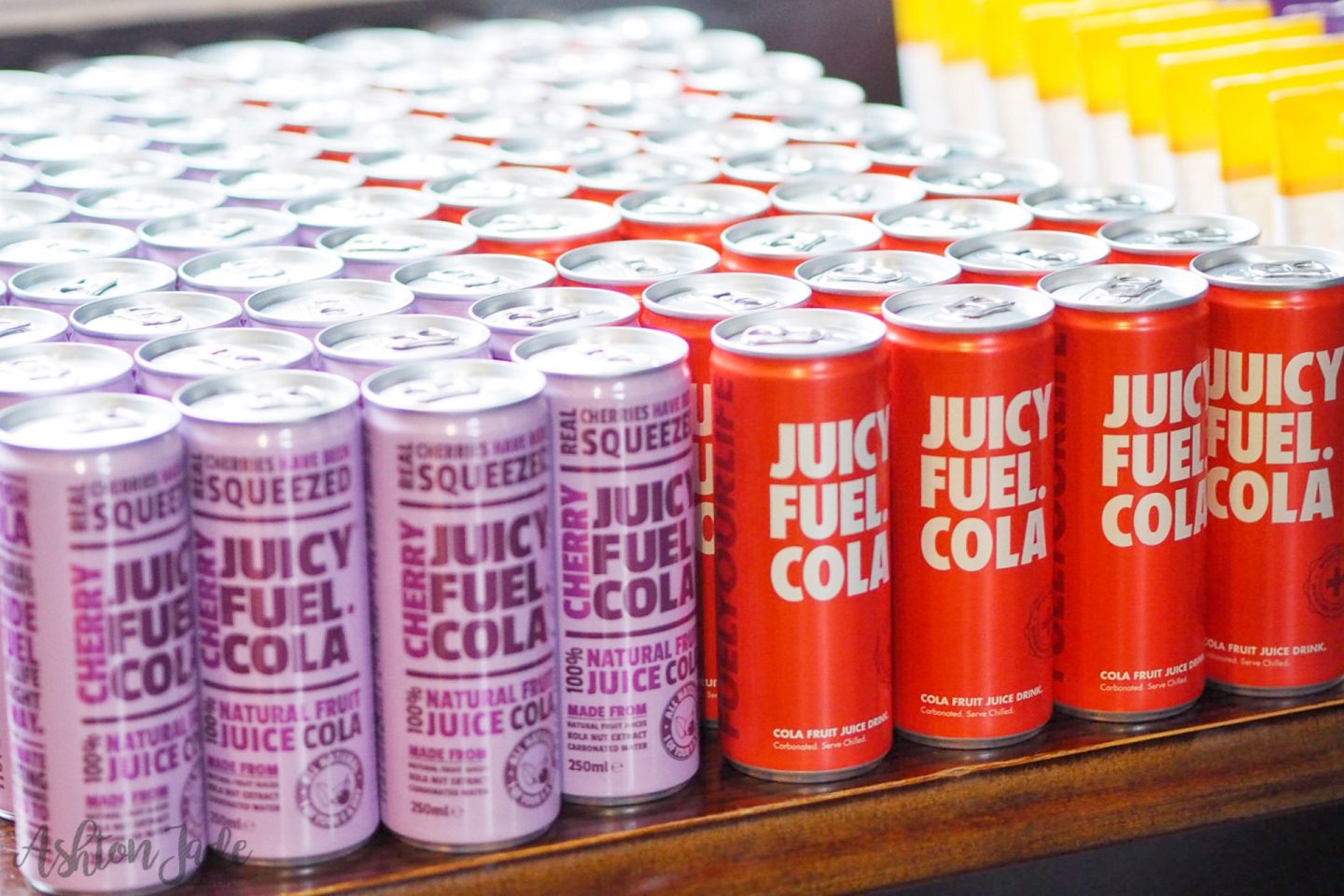 Already weighted down with competition and raffle prizes as well as some tasty treats and products from the brands that attended, the guests were all given one more treat in the form of a big Jewellery Box tote bag that was filled with tonnes of goodies that Kirsty and I had organised. From stationery, to make-up, to food and more, the bags were filled with an assortment of goodies from brands such as L’Oréal (World Duty Free), Superdrug, Wordery, Lola Make-up, Virtue Drinks, Twisted Halo, UBU Beauty, Lypsyl, Chapstick, Swisse, Papier Poudre, Alpro, Juicy Fuel, The Berry Co, Lighter Life, Munchy Seeds, Nutripot, Baru, Tints of Nature, Sebamed, Marco Polo, WhiteWash and soooo many more. Despite originally deciding to let goodies take a backseat and instead focus on getting people to mingle, we actually ended up organising some pretty spectacular goodie bags, if I do say so myself!

I loved so many of the amazing products we were all gifted, but some standouts for me were definitely the Marco Polo travel journals (I go away an awful lot in case you haven’t noticed, so this is very handy for me!), the L’Oreal Sexy Balm Trio from World Duty Free (it’s a travel exclusive which means it’s even more of a special treat) and the Wordery to-do list notepad, which I’m already putting to good use by listing all of my blogmas post ideas! Quite naturally, all of the make-up, beauty products and food is going to good use too. 😉

I am so beyond happy with how this event went. Literally, I have the cheesiest grin on my face right now thinking back to it. We had three fun-filled hours of games, competitions, mingling and more, all finished off with an awesome raffle for a good cause, goodies to take home and new friendships to last a lifetime. This was the first event I’d officially been a host of, and despite the initial stress and worries, I would happily do this weekly if only time would permit me to do so. (And I think Kirsty would agree.)

Before I finish my rambles, one HUMONGOUS thank you goes to everyone that came along and made the event what it was. I genuinely love you all!