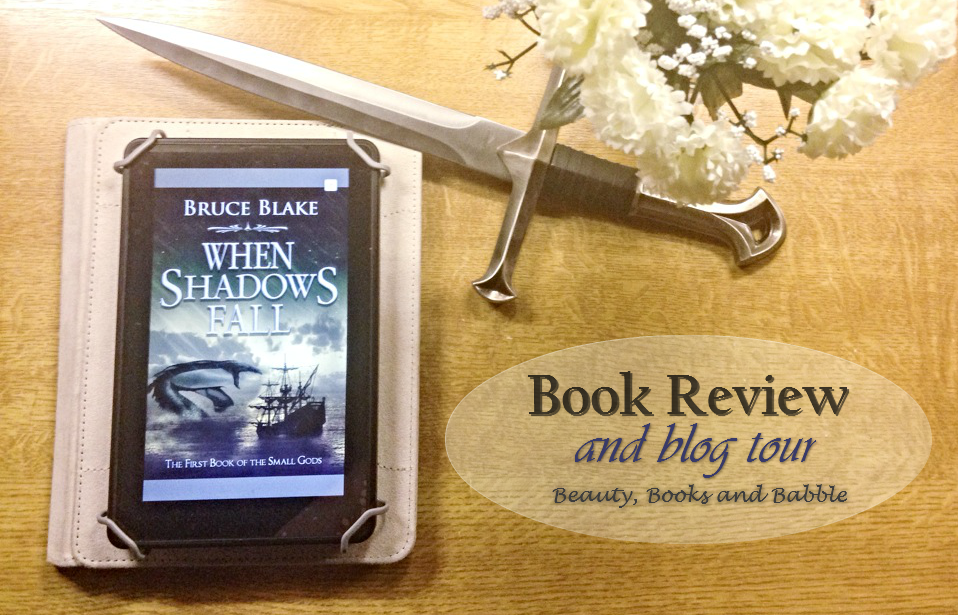 I was kindly provided with a copy of the book as part of the Neverland Blog Tour for When Shadows Fall by Bruce Blake. I gave this book 3.5 stars! Today I will be posting my review for the first book followed by the synopsis of the next book in this fantasy series.

When Shadows Fall is the first installment in Bruce Blake’s The Small Gods series. The story follows Prince Teryk, who finds life behind the castle walls boring and uneventful. Whilst he and his sister amuse themselves by breaking the rules, they find themselves stumbling across a long-forgotten room they never knew existed, which holds a scroll of great importance.

The parchment speaks of the banished Small Gods, the fall of man and the kingdom’s saviour: the firstborn child of the rightful king. Now he’s found his perfect opportunity to prove himself to his father, Prince Teryk sets out to discover the things mentioned in the scroll, and assure his place in history. After a life where he’s given special treatment and people convince him he’s a great man despite his flaws, can a cocky prince really save mankind against ancient magic…?

I found my brain utterly engaged and interested straight from the prologue. It was action packed and blood was spilled before the story even began. Though the action died down for a while from here on, Bruce Blake has done a brilliant job of laying the groundwork for the future installments in this fantasy series, and I can’t wait to get stuck in. Just as the book started with action and fatality, it was just as compelling towards the end as it closed with the same, and definitely left me wanting more.

By telling the tale from viewpoints of different central characters on their own unconnected paths, Bruce Blake created a well thought out and developed world, and his characters all had wonderfully distinct, fleshed out personalities with their very own voice. Trenan, Teryk’s sword master and guard, was a personal favourite of mine, and already I can tell I will become so invested in him when things get wrought up as the story progresses.

Foreshadowing of indefinite connections between our various protagonists keeps me intrigued even now I’ve put the book down. Bruce Blake has succeeded in getting me hooked on a well built world with it’s own history and background and I’m looking forward to more twist and turns in the next installment (which I will definitely be reading, by the way!).

When shadows
fall, the darkness comes…

A disgraced Goddess Mother wanders blind and alone, praying for her agony to
end. When a helpful apostle finds her, could it truly by salvation, or does
worse torment lie ahead?

A sister struggles to understand a prophecy that may not be meant for her while
her brother fights for his life. If the firstborn child of the rightful king
dies, will it spell the end for everyone?

Darkness and shadow creep across the land in the form of a fierce clay golem
animated by its sculptor’s blood. It seeks a mythical creature whose sacrifice
portends the return of ancient evil banished from the world long ago. With its
return will come the fall of man.

As the game unfolds, the Small Gods watch from the sky, waiting for their time
to come and their chance to rise again. They wait for the fall of shadows, the
coming of the darkness.

They wait for night to descend.